The 7th MENBO General Assembly took place in Beirut, Lebanon, on the occasion of the International Conference on River Basin Management and Cooperation in the Mediterranean Region. A Liaison Bureau meeting of MENBO was celebrated on 6th October. As well as celebrating the MENBO Liaison Bureau and the statutory sessions, the 7th General Assembly of MENBO was organised around three thematic Roundtables dedicated to:

During the General Assembly, the Presidency of MENBO was renovated. Mr. Fadi COMAIR, General Director for Water and Electricity Resources, Lebanon, was elected as the new President of MENBO for the period 2009-2011. The General Assembly expressed its high gratitude to Mr. Walter Mazzitti, President of EMWIS, MENBO President 2007-2009 for his successful Presidency of the Network. Please find the Programme, the Presentation1 Menbo, the Presentation2 Menbo, the Presentation Menbo Liaison Bureau, the Declaration of Beirut English, the Declaration of Beirut French of the meeting. 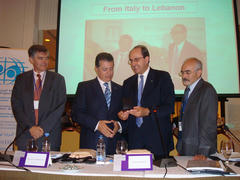